ORION BlogLifestyleExplore the History of Brooklyn Basin at the Terminal Building

Explore the History of Brooklyn Basin at the Terminal Building 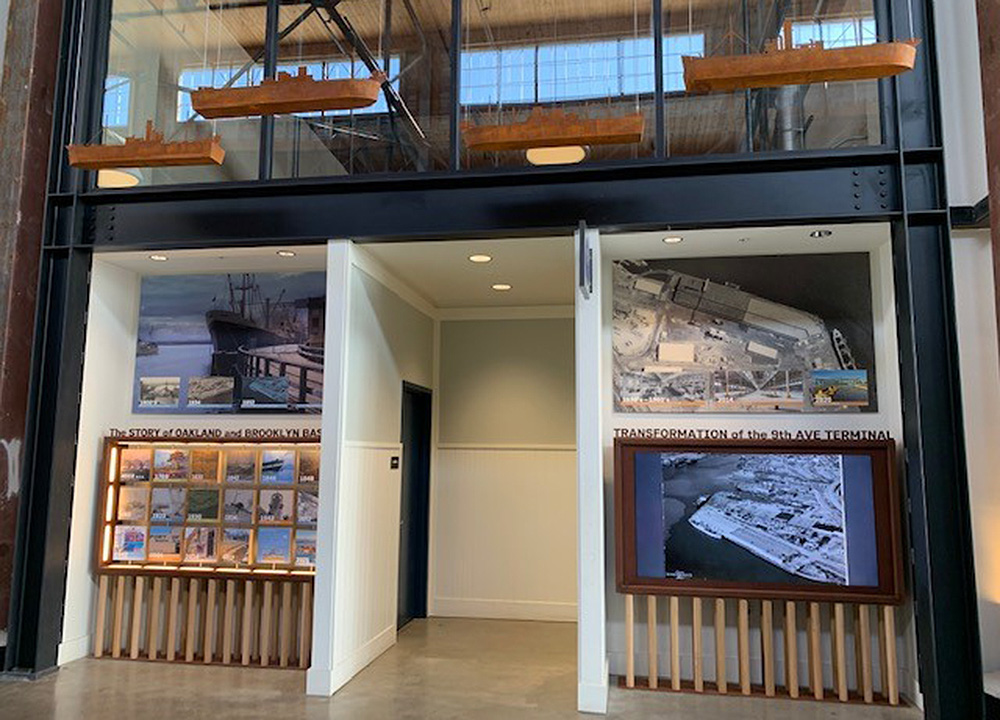 At the foot of Orion Oakland lies a historic site which now tells its own story. Visit the 9th Avenue Terminal Building soon to view the NEW historical exhibit at Brooklyn Basin. Created by Gyroscope Inc., based in Jack London Square, the display shares the history of the 9th Avenue Terminal at Brooklyn Basin and the role it has played in the development of the Oakland Waterfront-past, present and future. Gyroscope plans and designs museums for clients across the US and beyond. We’re thrilled to have them design an exhibit so close to home!

The 9th Ave Terminal once handled cargo ships that carried items stacked inside and on decks. A method superseded by the advent of containerized cargo and the enormous ships that transport them. The ship models hanging overhead represent that earlier era’s ship style.

Brooklyn Basin was born before California was a state! Here are some fun facts about the inspiration behind the name of our waterfront revitalization project along the Oakland Estuary: Brooklyn is the name of a 125’ ship that made its way to the Oakland estuary from New York and anchored up in 1846. This anchorage became known as Brooklyn Basin, which remains the name on nautical maps today. In 1856, settlers on the east side of Lake Merritt, identified so closely with that ship, that they incorporated their new land as the Town of Brooklyn. In 1872, the Town of Brooklyn annexed into the City of Oakland – forever cementing the Oakland-Brooklyn legacy.

Created to share the history of the 9th Avenue Terminal at Brooklyn Basin and the role it has played in the development of the Oakland Waterfront-past, present and future, the structures that support the display evoke the wooden piers that supported the terminal building itself, and the trucks and trains that distributed that cargo across the country. Several flip panels suggestive of the cargo in the ship’s hold, communicate the timeline of rapid change at the Oakland Waterfront. The exhibit also includes a multimedia presentation which shows images from archival photos and documents as well as the planning, design and reimagining of the site as a gathering place for the new neighborhood of Brooklyn Basin.

Orion Apartment Community was also named for the site’s history. Helping mariners find east and west, Orion is a prominent constellation located on the celestial equator and visible throughout the world. It is one of the most conspicuous and recognizable constellations in the night sky, often used by voyagers to navigate the sea.

Located at 288 9th Avenue Oakland in the revitalized Terminal Building, shared with Rocky’s Market Brooklyn Basin, California Canoe & Kayak, plus Oaklandish, residents and guests are invited to explore the new exhibit to learn more about Orion’s neighborhood rich with local history tying our site to the shores of Oakland.

Experience life along the Oakland Waterfront! Introducing Orion, luxury apartments in Oakland CA. We offer the best amenities and a variety of floor plans designed to fit you. Visit our amazing homes today. Life on the water here comes in dozens of unique sizes and looks. Orion offers a generous variety of studios, one-, two- and three-bedrooms and townhome-style floor plans to choose from, each complete with premium finishes including polished quartz countertops, stainless steel appliances, and an in-unit washer/dryer. Start exploring plans and amenities at this exciting new apartment community in Oakland’s newest neighborhood at Brooklyn Basin!